What to Remember During Suicide Awareness Month 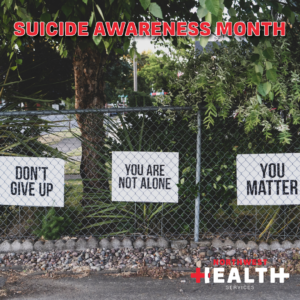 NAMI, the National Alliance on Mental Illness states that this is a time to share resources and stories in an effort to shed light on this highly taboo and stigmatized topic. Did you know that 1 in 5 adults will experience mental illness this year? And every year, thousands of people die by suicide? This has to end.

The FCC has recently urged that there be a three digit, 911-style suicide prevention hotline number. I fully believe that this needs to happen. When someone is in crisis mode and feeling suicidal, they are going to be more apt to remember a three-digit number vs. the hotline numbers that are currently in place.

Suicide has personally affected me and my family. My son, Brenan Mikal Barksdale, died by suicide on November 6, 2017 at the young age of 21. He had struggled with depression for many years, but was one of many that felt like talking about his depression to family or friends would put a burden on them. This could not be further from the truth, but in his mind that’s how he felt. I often wonder if he knew of the multiple means of communication that were available to him when he was contemplating suicide. I also wonder how many other people that were in crisis mode, didn’t know that there are people out there that can help. I feel that going forward it is my mission, along with countless other survivors of loss by suicide, to be sure that all people know that there is help, and that they can talk to anyone via phone call, text, or chat if they are feeling suicidal.

A very common myth is that if you ask someone if they are suicidal, that you’re planting the thought in their minds. This is far from the truth. Studies have shown that if you ask the question directly, “Are you feeling suicidal?” or “Do you have a plan to die by suicide?” it will help you get directly to the point and give you time to find help for that person. Ask the question(s). Get involved. Be the voice for those that are struggling and don’t know where to turn. Together we can let the nation know that there are people that care about them. Together we can make a difference.

It’s OK to not be OK

My most favorite saying right now is, “We are stronger than we believe, braver than we think and loved more than we know.”