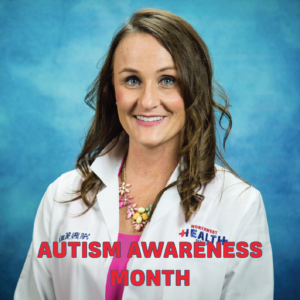 Hi everyone. My name is Rachel and I’m a Family Nurse Practitioner at NHS at the Family Medicine Associates location. I have been asked to write my first blog ever. The month of April celebrates and recognizes many health topics and concerns; one being the recognition/awareness of Autism (now called Autism Spectrum Disorder due to variations/degrees within this biologically-based neurodevelopment disorder).

One quick fact about Autism is these individuals have impairments in two major domains:  1) deficits in social communication and social interaction and 2) restricted repetitive patterns of behavior, interests and activities.  The month is special to my family and I because of my older brother Ryan who was diagnosed with Autism at the age of 4, back in 1986.  I would have been almost 2 years old at the time and while I can’t remember the early years of Ryan’s life my parents do.  Ryan became obviously different from the other kids around him by the age of 2 ½ when he suddenly stopped interacting with other children, did not communicate how other children did, and began isolating himself from all around him. It took over a year to finally get a diagnosis way back then and even with the diagnosis not much was known.  My brother spent years of his life being observed, studied, and tested by medical professionals at institutions and doctor’s offices who were searching for an answer for his impairments.  These few years were rough on my family and most of it my mind has chosen to block out. I do remember months where my brother would be away at special camps and weekends spent away from my parents as they took off to go visit my brother. I remember my parents crying at night over paying the medical bills and struggling to find ways to survive. I remember his teenage years being filled with emotional outbursts as new medications were being trialed to get him calmed down and stable enough to fit into society.  The house was locked from the inside out so that Ryan couldn’t run away as he transitioned into his late teenage years. Most of our neighbors became use to the abnormal family living nearby, some wanting us to move and others embracing Ryan with open arms. The school years were difficult for my sister and I (Amber is 1 ½ years younger than myself and the youngest of us three kids).  Ryan was put in special classes and often made fun of for the way he acted and his social awkwardness.

It took a while for Amber and I to make friends but the friends we did make we knew were good people.   It was hard to have friends over and throw birthday parties as Ryan needed the attention more, compared to us girls.  I struggled the most in High School as I was trying to fit in and sometimes even avoided talking about my brother to new friends.  I look back now ashamed of myself for acting this way but understand watching other kids at this age trying to fit in.  I was active in sports and it was difficult for my parents to find babysitters and struggled to have Ryan attend the games as noise bothered him and busy crowds made him nervous.  I was always nervous during the games that Ryan may throw a fit or run off, so it was sometimes easier if one of my parents stayed home with him. He didn’t come to the game to watch me play sports so I knew he was happier at home in his room.  Despite all of these challenges, my brother stayed in High School until the age of 21 and after proudly receiving my diploma, I turned around and walked back to get him and walk him across the stage to get his diploma with a standing ovation!!! We did it. I wasn’t  embarrassed anymore to go in public with him. Society had finally accepted him and my family as much as they were going to. There was no more hiding from people and worrying about what they thought of us.  It was the best feeling ever.

This month we celebrated Easter with him and the family in Kansas City.  His caregiver drove him 2 ½ hours to meet us and my mother drove him back to KC.  We still have to hide Easter eggs for him to find and celebrate every holiday as if he were four years old still.  We still have alarmed security on the doors otherwise one of us has to sleep in front of the bedroom door so he doesn’t get up in the middle of the night and eat all the leftovers.  The end of the month my parents are spending in Kansas at the grandparent’s farm because each weekend my brother calls wanting someone to come see him.  We must of done something right because Ryan aka. The Big Guy or  Skyin’ Ryan still misses us weekly.  He receives 24-hour round-the-clock care from the State of Nebraska but his services has allowed him to be much more independent than if he lived in other states.  He shares a house with two other boys who receive similar services.  The fridge must be kept locked and the shower water has to be checked for temperature prior to him bathing.  I call him my “forever-4-year-old” brother when explaining him to other people.  He requires supervision and forever will but less and less due to modern technologies that allow alarms on doors and safety locks on appliances.  I spent about two minutes on FaceTime with him today watching him giggle and laugh about who-knows what. He is a man of few words but he has grown into a mighty amazing man.  It’s a huge accomplishment when he shaves and doesn’t cut himself (with supervision) and a huge disappointment in the staff when we get the phone call that he has managed to shave off one of his eyebrows again.  I just love my brother so much and love my family for getting through some tough times and coming out on top.   We are lucky to have Ryan in our lives and each of us are better people because of him.

So, as we celebrate the month of April, I thank you all for becoming more aware of Autism by reading my “first-ever” blog.  Every day is Autism day in my family! I wouldn’t want it any other way 🙂